You know the story, right?! After all, it’s Mumbai, the city that never sleeps and an addiction that you cannot live without. While Mumbai is a world in itself similar to the tale in the movie Inception, a universe in itself as you wade deep inside the city. It’s South Mumbai that we affectionately call SoBo. Posh and glamorous. Once you set foot in SoBo as a traveler, resident or a plain visitor, it grows on you in more than one way where you can spend hours exploring its various facets and populace that merge seamlessly like a whole mass. Today is Friday. I take you on a tour in SoBo which I made my home for two years. For sure, it’s super expensive to afford living there but hey, it’s a lifestyle with the spacious roads, eateries, sea view, our lifelines the local trains, beautiful and sexy damsels, of course, street food, paperback books…and much more. It never cease to fascinate and intrigue.

One of the most expensive places in SoBo, cosmopolitan in outlook and bearing obnoxious wealth with the super expensive abodes but, at the same time, showing a human face. So many things that you can indulge in Churchgate where I stayed and be surrounded by the local railway station where millions commute daily, hip and cool colleges like Jai Hind on B Road, Sydenham and Government Law College on A Road, KC College/HR College near Oxford bookshop and opposite Oval Maidan where the great Sachin Tendulkar trained. Of course, Cyrus Broacha would be seen on Sundays with his family for a lunch outing at Oval Maidan, watching Mumbaikars playing football and cricket.

One of my favorite places at Churchgate is ‘Not Just Jazz by the Bay’ and it’s not a rare sight to see Shibani Kashyap performing. The best part about Churchgate is that it’s a minute walk away from Marine Drive to your right and to the left is Eros Theater and eateries such as Stadium Restaurant and Gaylord. Stadium serves one of the best kheema, scrambled eggs and of course, tea. There is also a cyber cafe upstairs and post my meal, I would hop upstairs to surf the net.

Guzzling a beer and pizza by the wooden window as the waft of breeze air flows from the sea-facing Marine Drive kissing the cheek is pure bliss. Not Just Jazz by the Bay is thronged with the creamy crowd. It’s the best way to relax where the waiters dressed in black are on their feet almost tirelessly to serve the growing crowd. You walk straight, past HP filing station, and hop on to Gaylord which serves the most amazing coffee, pastry, bakery and French bread. The restaurant is divided into the pastry shop, restaurant on the ground floor and dining upstairs. There is a host of celebrities whom you can often spot and one afternoon, I saw Perizaad Zorabian chilling out with friends. 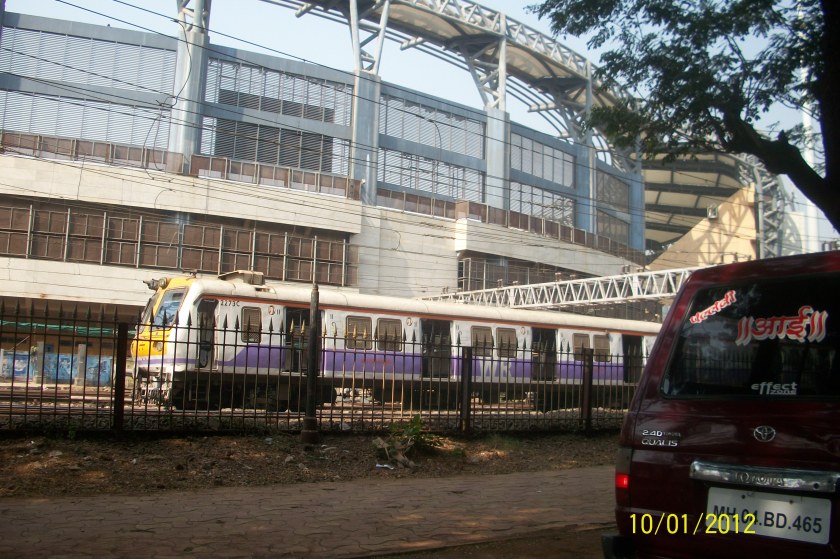 There is more to SoBo and after a sumptuous dinner, you could always treat yourself to ice cream at K Rustom that serves an exquisite variety adorned with wafers and life couldn’t get better than that. I remember the elderly uncle and aunty, going the extra mile to serve and giving orders to the staff to ensure that patrons are comfy. It’s a place that you couldn’t skip in this part of the city. Mocha’s hookah is always sinful and the place is frequented by a bevy of young students as you sit down to enjoy in a very cozy and comfortable ambiance to steal an intimate moment. It also happens. After all, it’s Mumbai.

Sundance Restaurant is just after Eros Theater and one of the best places for beer and the best non-veg food that should quench your thirst or satiate hunger for everything extraordinary. Of course, the street shops are a must to visit even if you don’t buy anything or books spread on the pavement makes it an exciting choice for book worms.

The University of Mumbai at Fort is one of the main tourist attractions in the city where sits the famous Rajabhai Tower, designed by the famous British architect Gilbert Scott. The iconic clock is a huge 280 feet structure and it’s near impossible for someone to plod its steps in the city and not fall for its charm. You can see it from a distance as you get out of Churchgate station, standing outside Eros or the Oval Maidan. It bears an out-of-the-world structure which is aesthetic and the 13.5 feet in diameter clock bell striking loud like a drum to remind us of its rich legacy and place of prominence in India’s history.  It stands tall like the majestic Gothic structure building on which it sits atop. During my student days inside the Rajabhai Tower library, the bell reminds us it’s time pack up and you know it’s closed at 6 p.m to be precise or 8 p.m during exams time.

The Rajabhai clock Tower owes its name to the mother of millionaire broker at BSE, Premchand Roychand who funded the construction cost for a princely sum of 2 lakh at that time in the 18th century. Legend goes that Roychand’s mother was a devout Jain but was blind and the evening helped her to know the time by herself.

The Fort area stands home to the architectural delight of the Flora Fountain at Hutatma Chowk which is majestic, elegant and bears the old world charm. It marries water, architecture, and sculpture depicting the Roman Goddess Flora. I am sure the Goddess witnessed beautiful and tragic romance of young couples swarming in the city. The Bombay Stock Exchange, Planet M and of course the lining of shops under the concrete roof where street stalls cohabit together in the Fort area. It’s the place where you get the mouth watering Bombay sandwich designed with capsicum, onion, tomato, and cheese. There is no dearth of restaurants in Fort as you walk your way in the lanes that host BSE, veg or nonveg food, depending on your culinary taste, be it mutton, chicken but beef deleted. Of course, shopping for clothes, you name it, you get it…branded shops, clothes scattered on the road in the same vein as paperback or Westside housed in the gothic style architectural Army Navy Building. Before I forget, you should check out Cafe Military which is famous for its bun and chai, one of the best Irani cafe at a touching distance of Bombay High Court.

A confluence of souls converges in one of the most breathtaking spots in SoBo. It’s Marine Drive where the Arabian sea stretches in a seamless stream of water that makes it the favorite spot of not just the residents of the neighboring Churchgate area but also from far-flung places who comes in the city to get a peek of its soul.

In the hustle bustle of city life, there is no guessing which is the place that provides solace to lovers stealing a secret moment, elderly walking at night, street urchins begging for alms, people jogging as vehicles honk and screech their way in the mad dash. The palm trees offer shade as one take a long walk from one end to the other, towards Nariman Point and on the opposite side to Chowpatty beach. It’s quite a sight at night from your room where Marine Drive becomes the Queen’s necklace with light adorning its pathway. I enjoyed my walks towards Nariman Point and climbing atop the boulders to watch the sea flowing down from top. Anil Ambani was often spotted, sweating it out at 5 a.m in the morning followed by his black cats commandos and once I saw in the evening where the sun was surfacing, Priyanka Chopra and Bobby Deol doing a dance sequence atop a roofless double-decker bus, waving to cheerful fans shooting them on their camera phones.

Sipping a hot cup of steamy cup of tea which is sold by vendors walking and on a bicycle is common spot on Marine Drive. The afternoons and evenings witness a flurry of activities with people thronging this spot. There can be no better place than this hotspot in SoBo. Of course, ITC and Ambassador Hotel lingers on the main road where you can hop on in the wee hours of the night in the AC restauranr and you get a refill of your filter coffee for the price of one. Cool, na! 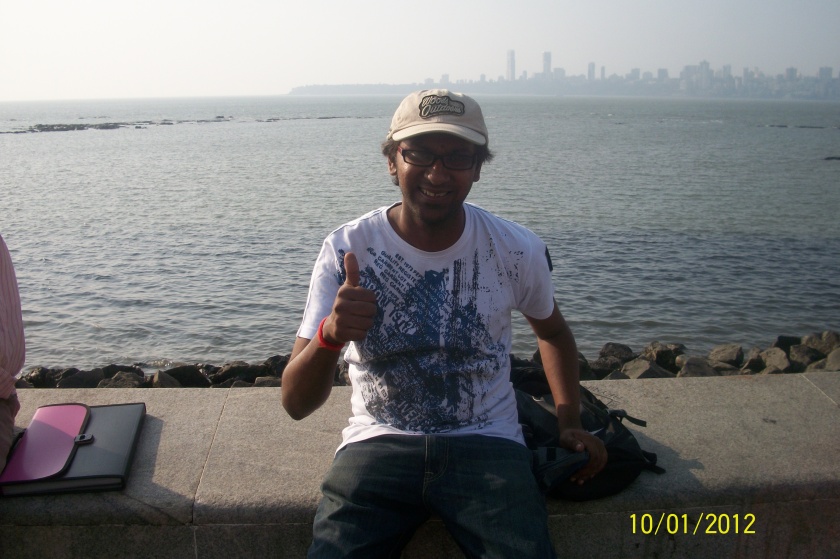 Staying in the hostel at International Students House (ISH) has its own perk as you just need to cross the road to find yourself at Marine Drive. The roads that elongate at Marine Drive, starts from A-Road to D Road and Wankhede stadium is 10 minutes walk away. Standing and walking on the parapet is always bliss and the pathway is a good exercise to stretch the limbs and legs. No wonder, Marine Drive is everyone’s favorite.

Strut your feet at Marine Drive and you will ultimately reach the posh and richest places in South Mumbai, Nariman Point, that houses Trident Hotel, Mantralaya, consular offices and embassies as well as a host of names such as Birla. It’s a haven for office goers. The place serves the best of street foods such as Pani Puri, Bombay sandwich, fruit salad, fresh fruit juice, masala dosa and of course my favorite breakfast menus, Idli, Poha and the amazing Sheera. It was my morning ritual at 5 a.m to walk from Churchgate towards the station past Asiatic Department Store to reach Nariman Point for chai and the sweet Sheera. On Sunday, Nariman Point abandons its cloak of corporate and hospitality look to transform into a family haven and fest for everyone, elderly, young or very young.

It’s a shimmering sight that serves the plate full with entertainment for children, horse and buggy ride for the small ones and lovers, munching on channa and bhel. It’s nothing less than a festival of sort with lassi, falooda and sugar cane juice cooling your heels. You can always catch a movie at Inox inside CR 2 mall or a play at NCPA. Of course, before the ban of the Tonga (horse carriage) ride, it added sheen to the SoBo experience at Nariman Point.

Postscript: This post has been written in mind taking into account the time I stayed in the city. Of course, it has been prompted by Sharukh Bamboat’s Mumbai blog and this wonderful post on Mumbai: An Unlikely addiction. As it, we all have our own Mumbai stories. Of course, there are places such as Suryodaya supermarket outside Churchgate station which is now closed. I have also omitted Satkar veg restaurant where I was regular for afternoon snack and dinner. It’s hard to do justice in one single post on my beloved SoBo and reason why there will be a second part, where I might revisit Churchgate again as well as other places such as Chowpatty, CST and Colaba. Hope you enjoy it as I did revisiting the iconic places which I made my home less than a decade back and revisited four years earlier. Happy weekend and hope you can soon plan a trip to Amchi Mumbai if you haven’t yet and fellow Mumbaikars in the suburbs, what are you waiting for?

If I have omitted something, feel free to add spice to the SoBo adventure.