Friends are like the flavor of world’s favorite coffee and chocolate swirling on the tongue’s palate. Friendship tales have always been special for the soul’s sanity and the inner strength that keeps me going pretty much like popping vitamin. This Friendship Day on Sunday was a special affair and choosing to celebrate by sitting at the coffee shop with my favorite Cappuccino and chocolate muffin, reading stuff and calling friends via WhatsApp. I wanted to spend the day alone, reminiscing on the moments of glory, making the most wonderfully flawless moment with the soulful family. Yes! I call my friends that.

The only thing about the Cappuccino is don’t know why the coffee shop calls it flat white. Is it an American thing? I am quite curious and intrigued to unpeel the mystery and all connoisseurs do educate me on the whys. I am drifting. Coffee and friends double the shot of craziness and playing in the wild. I must have called and spoken to some six friends on Sunday. Meghna called me in the evening after she missed my calls. We spoke for a long time and this is what I like about friends. This unspoken rule where we can discuss anything under the sun, right from dating, our constant whining the time we were not working and life. The uncertainty that looms large over the choices made and how plans don’t always work.  I used to joke that we should become hookers. We laughed about it. Fuck ups, marriage, dating and career come with no warning signal and there is nothing that we can plan. Twists and turns that we take, halting and changing gear make for quite an interesting conversation and brings the inner peace within.

She was my internet girl friend. That’s how I was calling her and don’t read too much about it. Meeting on Gchat almost every day to discuss life and it has become so rare nowadays, something we haven’t done for more than 2 years with Whatsapp taking away this simplicity or the fact we get so busy sorting out shit and career. The drudgery of routine has taken a toll on our lives. But, there is something special and deep among good friends, the reflection and approach to things, agreeing on the past that shaped us and a future that hasn’t yet been scripted. I asked her about marriage plan and she was like, things are so unpredictable. We spoke endlessly and sharing on the fear of missing out, relationships that didn’t work for me. It dawned upon that the past should be buried and no point languishing over what didn’t click.

There is Ajitabh Bhaiya in Jamshedpur, the best friend Adi in Australia, beast and Amol who are all hitched but felt good speaking to them on this special day celebrating friendship and everything that matters. With Amol,  loads of laugh for no reason and our code Boom Shiva Boom. I love making new friends, blog dost who are on my Facebook list. There is P from Mumbai with whom mails were exchanged since she thought I took a dig on one of her posts but was pointing at the world going crazy over Sridevi’s death. We became friends and connected on a WhatsApp call this week. I have always believed that the vibes should matter when it comes to friendship and am not someone who open up easily to people, Our bonding was a surprise since we happened to speak endlessly for the first time as if we know each other for decades. Mumbai, India and writing keep us going on and on.

I find great joy in reading newspapers in this digital age. Nothing ever beat the happiness of gulping coffee and flipping through the newspaper pages. Being out of India, one of the missing links are newspapers and that was a favorite daily routine every single day in Pune or Mumbai. I would sit and wolf newspapers at one go. Someone traveled to India and brought few copies of DNA and TOI which I lapped. It felt like those days were back with happiness embedded in simplicity.

The goodness about life come in bundle and if that wasn’t enough, yesterday on the way to work, got a WhatsApp message of appreciation from one client whom I helped for an interview she was doing with a magazine. She was happy with my inputs and suggestions that finally got published. It always pays to be appreciated. 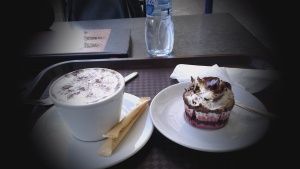 The isty bitsy dollop of rain soothes the atmosphere.

It brings and rejuvenate energy that unfolds in my midst.

The windy weather flutters my long and unkempt hair.

I spill the cappucino down my throat.

I am relishing the topping on my cup cake.

The first cup cake of the day is an awesome treat.

Some days sounds too good to be true.

I almost forget that I enjoyed every moment of the morning’s Yoga class.

I never felt so good inside the body.

Can it get better than that?

Life is indeed a cup of Capuccino as I thwart all worries.

A morning that splashes like cold water on the face.

The real icing on the cake.

Enjoy ur Saturday folks and hope u had it great:)

Dates and day tally at some point or another in our memorable calendar of life as we want to relive,relish and refresh the memories of life. Yes, indeed, the month of March tally with that of December….case in point Dec 24 was a Saturday and this D-day in March..well, I am not doing a stupid mathematical calculus or some shit like dat:) It’s not the question of sounding boring but to refresh the beautiful moments of life.

Christmas eve was my second day in Pune, December last and I felt that in few days, I lived a whole life in the city I call my home. Been there on day and day 2 was the day I set on to met my friends. Considering that the price of rick has shot up to 10 bucks, I preferred the bus option from Kothrud to Deccan..It makes sense to pay 7 bucks rather than some 35 bucks. As I alighted at Deccan and walked past Lucky restaurant, I looked with fondness at the Garware bridge, Archies and the way towards Bhandarkar road, the route I practically took almost every day during my college days. I went for a walk at Sagar Arcade on FC road and bingo..the library was gone, so was 49 & 99. I felt a heart burn. Time to go for a coffee at Barista and gosh! I am there after almost three years..actually more than that. As I ordered my cappuccino and read the Times of India and Midday newspaper, I lighted a cigarette. How I miss those habits?Listened to radio mirchi on my c3 Nokia cellphone and chatting with two cool college duded. Left ma bag at Barista and took the stairs to shop for a pair of short. As I was in the changing room, the phone rang and my God such uncomfortable moments always happen with me in Pune..Chanda on the line..kidhar ho chaldi aaa mein savera mein hoon…Put on my jeans swiftly and paid for the short. Time to collect my bag at CCD and dash towards Savera which is just opposite Fergusson College.

As I look at the table near the fridge, Chanda was waiting..we hugged as he said, Dude, after how many years?  Yeah, it’s been three years for the reunion to happen. He changed a lot and he is no longer sporting the informal jeans but classic trousers and shirt. Our Bwoyz have grown into fine gentlemen..Glad I am! Chanda changed for good and has found his passion..advertising. We discuss bout college pals and a project he might work in collaboration with Indian express. There are discussion of me and him collaborating on some future projects. He pointed at some weaknesses in me and I took note coz only friends who have known you for years and they are the reason for u to better yourself.

We want in his car and past Ghole road and towards the Peth areas where all the printing work are done as I get a hand at the simpler process of cutting A 4 papers. It’s indeed amazing to see the small part of the posters one see in newspapers, bill boards have their origins on the streets. Sometimes, a walk on the streets can give you a powerful thought an idea. As they say, thoughts transform ideas.

Post that, Chanda dropped me at DBC as I was going for shopping at Central which is close to E-square. The first thing which I did was to sip a cutting and headed towards Central, a mall I neva visited it was simply awesome. There were some chicks promoting B’lue, a new apple cum water appetizer. There was a lovely atmosphere at Central with a huge crowd and heavy discount going on. I was on a shopping spree and enjoyed Mocachillo at CCD. I didn’t realize it was christmas eve. Later, shopped for books and movies at Crossword at E-square and back again to FC road. One good thing on FC road at night is that it’s still the same. The beautiful crowd thronging the streets as the one sees the crowd queuing for food at the different restaurants and hotels. Not to mention the crazy traffic, horns and hawkers displaying their stuffs on the pavements. The best evening scene on christmas eve as dudes and babes putting their christmas caps. Santa is already there. On the way, I made the specs for mom at Eye studio optics. I made my specs there back in 2006 when I was in final year. Amen! The romance on FC never dies as I see couples walking hands in hands. The romance on FC is something to die for.

I was shivering and didn’t realize it’s winter. I was wearing a t-shirt and headed back to the room, not without buying a quarter of Imperial Blue whisky. Time to warm the body. Tuned on the TV and watching comedy circus and TV ads…Truly awesome.

P.S: Thought that my earlier post would be the last. But, I feel like writing more on Pune and rewind the happy days. More shall come. Stay tuned.