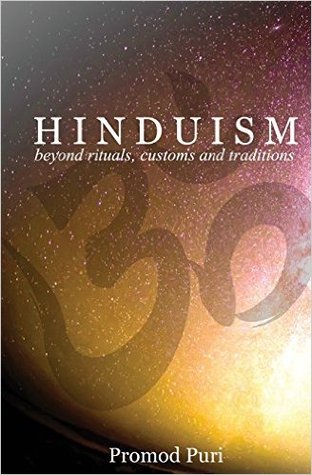 Religion is the opium of the people, Karl Marx said. Since times immemorial, various school of thoughts debated on the role religion plays in our lives to strengthen order and unify society rather than being a divisive force. Author Promod Puri’s book ‘Hinduism beyond Rituals, Customs and Traditions’ doesn’t pose as mere religious tokenism but is a real, honest attempt to analyze our fundamental values and the relevance of Hindu culture in the modern age.

At one shot, the book serves as fodder to put things in the right perspective, lauding social values but at the same time questions obsolete rituals to redress the wrongs that continue to plague us since ages. It’s the need of the hour to not only assess the Hindu culture but revise the teachings, albeit, interpretations of things.

The book was sent to me by the author for review.

Why are there so many gods and goddesses in Hinduism? Why worship an idol? Is going to temple mandatory in the faith? What impact does the caste system have on Hindu society? Why do some rituals make perfect sense while others are so vague? What are the secular and diverse characters in Hinduism? What physics principles constitute the sound of Om? What is karma and its role in our day to day lives?

The book explains the scientific and rational basis of the Hindu way of life in a very simple and concise manner. It’s precisely such kind of rationality which is lacking when obsolete beliefs and rituals are super imposed to make us believe in a far-fetched reality. Unfortunately, there are many myopic interpretations in the Hindu way of life that instil fears in believers and compels them to perform illogical rituals.

The fact is the true function of Hinduism is based on scientific logic and rationale. Promod Puri rightly put things in perspective, ‘The identity of Hinduism lies in its wide-open structure which allows and let develop diverse and distinct ideologies and practices…without any governing body or binding scriptures, studies in Hinduism and individual experiences.’

He speaks in the right manner to explore the system to enrich one’s spiritual state of being rather than being contented to follow as a matter of blind faith. Hinduism has always been a philosophy, embedded in our way of life.

Author Promod Puri doesn’t shy away in tapping on misplaced caste beliefs and blind ridden tradition that mars progress in the Hindu way of life. You name it, you get it… charlatans, bizarre rituals and fear factors. There are many self-claimed and fake gurus who have been twisting Hinduism for their own selfish benefit. The author assesses how such beliefs lead to the fanaticism that misinterprets the Hindu philosophy.  He valiantly refers to the dark practice of Sati and animal sacrifice which is still predominant in several quarters. The caste system is also highlighted where we discriminate on the basis of ascribed superiority where the untouchable are still discriminated or women are still not allowed to enter temples in some places. Speak about male bastion! It remains a blot on humanity. No wonder many of us are departing from the true essence of Vedas.

“Om Purnam is one of the most significant statements ever made anywhere on earth at any time. This small sutra contains the whole secret of the mystic approach towards life…It still remains the Everest of human consciousness.”

In the book, an interesting contrast is made between the most well-read and critiqued literature such as Mahabharata and Ramayana, who are as distinct from each other but they converge in form.

The author rightly explains how Mahabharata is most understood by the royalty and the educated class rather than the commoner. It holds significance for the Mahabharata is the product of the capitalist class who holds the belief that it’s the ultimate truth that cannot be questioned.

As the author says, ‘The absence of more Arjuns…in the dialogue along with the allegory of violent ambiance of a battlefield, constitute a puzzle in the esoteric philosophies of Gita.’

Ramayana remains a metaphorical study in the way Ram’s glory is chanted as ‘Maryada Purush’. His adventures are no doubt fascinating but he can  and should be questioned on being termed the perfect husband. It pretty sums up the agni pariksha modern women in our society are going through and how they are labeled as sluts. It whittles down to our understanding of the Ramayana in a patriarchal society.

“By a girl, a young woman, or even by an aged one, nothing must be done independently, even in her own house.”

“A virtuous woman who after the death of her husband constantly remains chaste, reaches heaven, though she has no son, just like those chaste men.”

Promod Puri’s book assesses Manu Smriti’s law in the most intelligent way which is a blot to the pure and disciplined Hindu way of life.

Manu Smriti is wrong in all its forms where he pitches for human indignity and the scorn he holds for women, those at the lower ladder in the class stratum. He makes no bone about his prejudice for women in society where she shouldn’t have any say  not only on matters of households but of prime importance. Sadly, Manu Smriti obsolete views are echoed by so many men and women are still degraded, ripped off their dignity. The hatred for women and their treatment as second class citizens is still vibrant in a demeaning manner and fulfilling of blind patriarch obligations.

There have been social reformers such as Jyotirao Pule, Swami Vivekananda and of course, Dr B R Ambedkar who in his book ‘Annihilation of Caste’ who was at the forefront of the fight for social justice and equality. The book addresses the issue. Certainly, the social reformers represented the glorious moments in Hindu religion, seeking a redress of inequalities and questioning the dominant mentality of the upper class.

While Hinduism beyond Rituals, Customs and Traditions is an eye opener and a   very practical guide to lead a healthy life based on the principle of equality, there are certain things that could have been better explored.  For instance, idol worship is presented by the author as one-to-one relationship and principle of non-duality,  should have been elaborated at length. In the same vein, the chapter about ontology where the author offers interesting insight on Nyaya Sutra on matters of validity in Hinduism lacks succinct explanation. It’s a very interesting philosophy that should have been debated in an expanding fashion and tapping its roots as well as relevance in today’s society.

The book, Hinduism beyond Rituals, Customs and Traditions is a must read which offers an objective criticism that goes beyond the Hindu way of life. It is well researched, objective and an insightful book that offers a healthy critique of the foundation of Hinduism, where often emphasis in laid on false pride, ego and un verified claim at times. Promod Puri’ explains arthas in a very competent and detailed manner and addresses the basic tenets of the rich Hindu philosophy.

19 thoughts on “Book Review: Hinduism beyond Rituals, Customs and Traditions”